The toddlers watch out for worms! 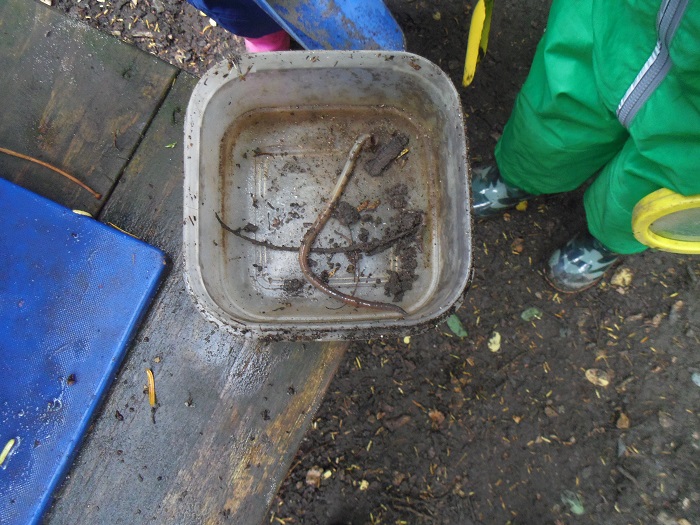 The toddlers have really enjoyed exploring a new theme of insects! This theme has come from our new children who have transitioned from the Pre Toddler room. Having recently explored a bug theme in the Pre Toddler room, these children have continued this interest and have been eager to tell all their new friends and carers all about different insects they know about. (Personal, Social and emotional development: Self-confidence and Self-awareness: Expresses own preferences and interests- 22-36months).

To extend this interest further, Lyndsey and Holly took the children into the back garden and asked them what insects they would like to look for. They said they wanted to find ‘wriggly worms’. In order to find wriggly worms, Holly asked the children where they think they may find them, giving them options such as the grass, the trees, the sand and in the mud.

With the general consensus being that worms live in the mud, we found some mud in the mud kitchen. We used the spades to dig the mud carefully and try to find some wriggly worms. Once we had dug a little, we stamped on the mud making loud noises so that the worms could hear us and would come out to play. We found some small wriggly worms, and one child said “Wow look, I found a big one”. The children rushed over and there was indeed a very long wriggly worm. (Communication and language: Understanding: Developing an understanding of simple concepts big/small – 22-36months)

We found a small box in which to observe him and watched him through our magnifying glasses. Lyndsey was then very brave and asked to hold the wriggly worm. He was very wriggly and tickled her hand. The children then had the opportunity to hold or touch the worm themselves. Some of them were saying “It’s scary, I’m scared”, while others were very brave touching it slightly and even holding him. We then decided to call him Megan. (Personal, social and emotional development: Managing feelings and behaviour: Can express their own feelings. 22-36months)

After we had all had a turn we decided it was time to put him back into his home, so we dug a hole in the ground and put him inside burying him in the soil. (Understanding the world: The world: Shows care and concern for living things in the environment – 30-50months)

We then went inside to tell all of our other friends about Megan the wriggly worm that we had found, but most importantly we remembered to wash our hands. (Physical development: Health and Self-care: Can usually manage washing and drying hands. 30-50months)

Moving forward from this we are really excited to make a bug hotel to see if we can find lots more insects to explore and observe. (Expressive arts and design: Exploring media and materials: Uses various construction materials – 30-50months)